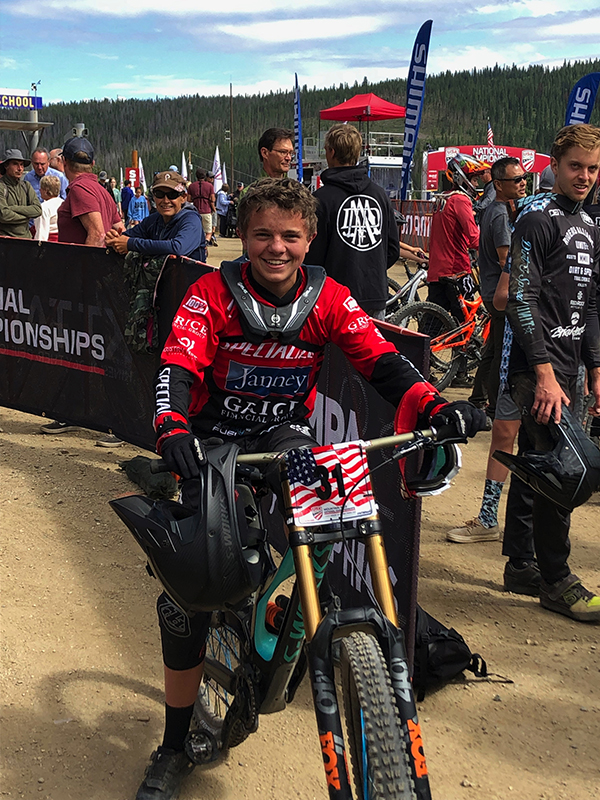 “He is passionate and dedicated to the sport, working hard and remaining focused on his dream of racing the World Cup circuit.”

Chris and his dad, David Grice.

Chris was born in 2003 and has been riding bikes since he was 4 years old. He started out on BMX, racing for the team Blue Chip Racing along with Luca and Walker Shaw. Eight years later, at 12 years old, he rode downhill for the first time at the Beech Mountain biking park in NC and got completely hooked. His first mountain biking race was at the Nationals in Mammoth, CA in 2016. Since then, he has been racing mainly downhill, enduro and dual slalom.

He lives in Pisgah Forest/Brevard, NC with his stepmom Codruta Grice and father David Grice, who is a very influential and supportive role model and mentor. David was also a professional road racer and became a time trial world champion in Masters Men at the UCI Road World Championships, winning 1st place in 2003 and 2nd in 2005.

In the past 2 years, Chris and his dad have been traveling together quite a bit, participating in events all over the U.S., finishing 1st in his category more often than not. Chris says, “Without his help, I couldn’t have gotten to any of these races myself, so I’m very grateful for all he does.”

The future is bright.

Chris’s first big win was in 2016 when he finished 1st in the U14 category at the “Beast of the East” ProGRT at Killington Resort in Vermont. Two weeks later, he won his second ProGRT at Windham Mountain NY on a World Cup track. He was able to get through all the tough features of this ride successfully, and remembers this moment as putting a “huge smile on his face.”

• On January 29, 2020 the Specialized Gravity Team announced Chris as their newest member

Chris loves the outdoors and when he isn’t riding, he really enjoys digging and building trails, which of course he rides after!